Show all 166 recordings of this work

After the burst of symphonic writing during 1772 and 1773, each of which produced seven new symphonies, Mozart's activity in the field diminished. Over the next two years only three new works appeared, of which K. 201 is the most remarkable. It is dated April 6, 1774 -- a period of Mozart's life singularly lacking in documentary detail. Until December, when he went to Munich to supervise the forthcoming premiere of his opera buffa La finta giardiniera, the entire year was spent in Salzburg; there are thus no family letters from this period. Mozart was now finally salaried as joint concertmaster (with Michael Haydn, brother of the more famous Joseph) at the Salzburg court, for which he composed a number of sacred works in addition to two large-scale occasional serenades (one of which, K. 204 in D, was later reduced to four movements to serve as a symphony). Notwithstanding its major key, Symphony No. 29 has many of the same serious and intense qualities as its immediate chronological predecessor, the Symphony No. 25 in G minor, K. 183, composed the previous fall.

The opening Allegro is unusual among Mozart's symphonies for its inclusion of a quiet introduction; the forward drive of the main part of the movement is maintained by repeated note and tremolando figurations. Both the Andante and the Minuet which succeed it are characterized by the use of dotted-rhythms which give the muted strings of the former a mood of dignified eloquence, and the Minuet rare energy. The final Allegro con spirito includes hunting-horn calls. Mozart's biographer Alfred Einstein described this finale as "the richest and most dramatic Mozart had written up to this time." One might indeed go further and suggest that K. 201 is overall the finest symphony Mozart had yet composed. He obviously thought sufficiently highly of the work to continue using it in Vienna; it was one of four symphonies he requested his father Leopold to send to him after settling in the city (letter of January 4, 1783). 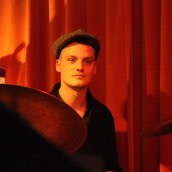 Piano Concerto No.4 in G major

String Quartet No.65 in Eb Major